The carbon footprint of bike manufacture and repair.

How many miles would I need to substitute a bike for my car before I’ve gone “carbon neutral” and what is its legacy once it has passed its service life?

The future for green cycling surely is for us all to know a bit more about the carbon footprint of bike manufacture and repair and how best to dispose of them once they have served us so well.

the World Steel Association states that approximately 1.9 tonnes of carbon dioxide is produced for every tonne of steel, so a fairly light frame is still going to be responsible for over 5kg of CO2, even before it is manufactured into tubes, welded into shape or shipped.

Bicycles are almost universally touted as being “good” for the environment, because riding a bike is green due to their small—if any—carbon footprint when compared to automobiles. But even disregarding their environmentally costly production, what about the carbon fibre footprint that is left when a carbon bike ends up in a landfill?

The fact is it will be there for a very long time.

Carbon fibre is neither biodegradable nor photo degradable. It’s a composite material, which means that it’s a combination of materials, whereby the different materials remain chemically separate and distinct within the finished structure. And as manufacturers have told us: it’s all about layers of material. The precisely engineered layers are what give a carbon frame superior performance, but those many layers also make it difficult to recycle

Looking at the basic environmental cost of manufacturing cars, there is an extremely wide range, so these numbers should be considered a rough outline based on numbers by The Guardian and other sources:

Here’s a look at the CO2 emissions for cars based on 10-mile round-trip commute over a year (only 2,600 miles):

Mining and manufacturing using aluminium, titanium, or carbon fibre is resource intensive. The qualities that make titanium a great material for a bicycle frame – hardness and durability – also make it energy intensive to refine, with 70 percent wasted in the machining process. Steel is not only energy intensive to create but also directly emits CO2 as a byproduct of the production process. Aluminium production consumes five percent of the electricity produced in the US each year and accounts for almost two percent of the world’s annual greenhouse gas emissions, though bicycle production accounts for only a small fraction of that total. Recycling 29 aluminium cans will save enough energy to run a television for a month. Recycled aluminium uses just five percent as much energy as mining and producing new metal.

“A more expensive bike might be a greener purchase because it’s designed to last longer.”

Clay Wagers, co-owner of Oakland’s Bay Area Bikes shop, has been repairing bicycles for 16 years. He cited big box stores as the biggest culprits in selling bicycles with out sized carbon footprints. A cheap, glitzy bike may start its life in a very dirty, polluting manufacturing facility and include what Wagers called a “ridiculous amount of unnecessary materials.” Designed with little thought to function and sold very cheaply, these bikes often end up at the back of someone’s garage or in a trash heap. He thinks the unpleasant experience of riding one of these inferior bikes may discourage people from becoming daily cyclists, noting, “If you start out on garbage, you’re not inclined to actually think about how investing more is justified.”

According to Tern’s Founder, Joshua Hon, “Our philosophy is that higher quality, serviceable products have a much longer life span – which we consider to be a much more responsible use of the earth’s resources.”

“Our stuff was moving around, I would say, five times more than now when we manufacture in Taiwan,” He cautions against a knee-jerk “Asia is bad” attitude, noting that the compact manufacturing area in Taiwan, where a huge amount of bicycle manufacturing takes place, minimises transportation before the final products get shipped to destinations around the world.

CO2 emissions from moving bicycles in a huge ship across the ocean can be actually relatively small compared to moving them in a courier van back and forth across North America.

The size of your bike’s environmental footprint can vary even before it hits the road.Think twice before buying a bike with a carbon fibre frame. The energy-intensive process of creating and moulding these materials produces toxic wastes. These frames are less durable than others and can be difficult to repair—a combination that often lands the non-recyclable materials on the garbage heap

At the moment there are only two facilities globally that recycle carbon fibre and both of those are essentially in start-up mode. “That creates layers of challenges in both economies of scale and the simple act getting the material to a place where it can be reclaimed. While the majority of the carbon footprint is in creating carbon fibre, we prefer not to be shipping it long distances for recycling. The good news is that there is market value in the material once it has been recycled and that demand really helps underwrite this effort. This is not like plastic bags where the value of the recycled material is often less than the cost of recovery.”

The big worry right now is that carbon fibre bicycle frames are falling in price, and coming down market increasing the numbers significantly.

While scrap metal collectors would likely swoop down on an old steel bike left out on the curb, there is no comparable market for carbon fibre frames. This remains is a concern to Jim Colegrove, Senior Composite Engineer for Trek Bicycles. “In the not too distant future we are going to see more and more products sitting out on the curb,” he said.

Bike riding is as eco-friendly as you make it. If you’re on your third aluminium frame this year and the other two are dumped at the edge of that mountain meadow you like to drive to, then all you’re doing is tipping your hat to eco responsibility without doing any of the work. Not cool.

What really counts is using your bike every day. After all, you’ve worked back its initial carbon footprint after about the first 600 miles.

You ride a bike because you want to do your bit for the environment, right? You’re aware of your carbon footprint, and although what secretly pushes you onward is the thrill of the thin layer of rubber between you and utter destruction, you’re smugly satisfied at the fact that you’re also doing good. But your green justification might not be the sure thing you think it is.

Do you know where your frame was manufactured? How far it travelled to the bike shop where you picked it up? How about that snazzy little CO2 canister you like to use when you have a puncture? And how, exactly, do you get to that fun bike trail where you like to spend your Saturday afternoons?

That eco-happy little daydream of yours could be as full of holes as a fine piece of Emmental.

But before you tearfully lift that carbon frame back onto its pegs and break out the gas-guzzler, let’s break it down and have a look at the worst case scenario. The situation might not be as dire as you think. 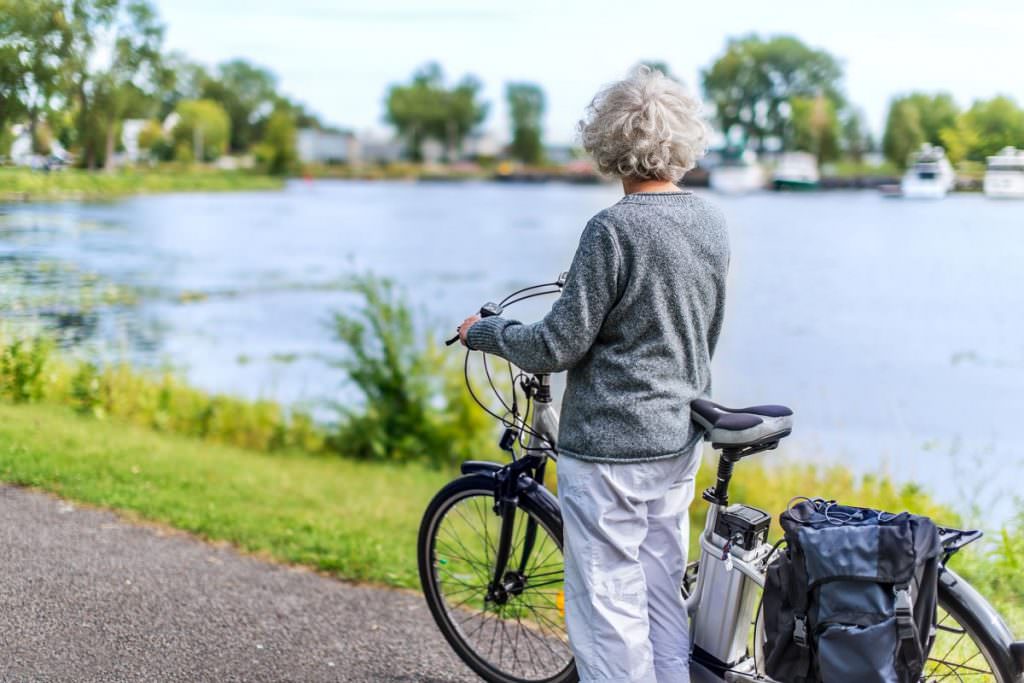 First question: do you ride an e-bike?

If you do then yes, you’re technically leaving a smaller carbon footprint than, say, a Mack Truck, but please don’t tell me you do it to be green. First thing you’re looking at is a Lithium-ion battery, most likely 36v. I’ll spare you the technobabble about how exactly the battery works — what you need to know is that not only does it have a carbon footprint all its own, manufacturing it calls for nasties like cobalt and nickel compounds. Bad for the environment and the poor schmuck who’s putting it together.

There’s also the tiny detail of needing to be recharged with electricity manufactured, depending on where you live, from good ol’ fossil fuel. You bought your e-bike to be eco-friendly you said? Go back and read what we said about the thrill of the ride. 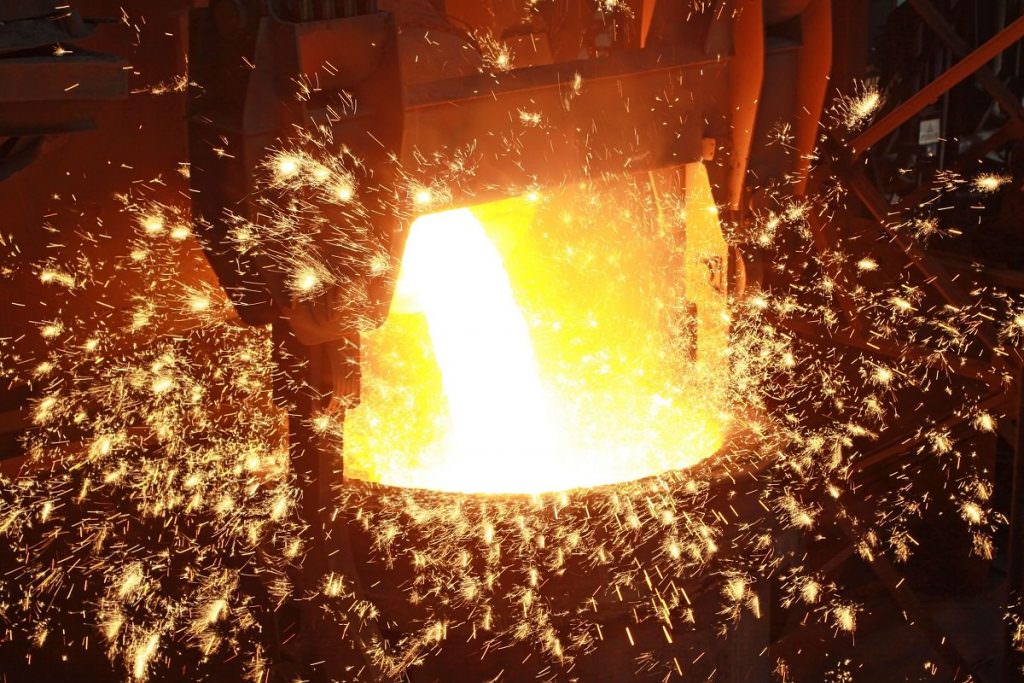 So your bike has an aluminium frame?

Better, but still not awesome sauce. You’re on the right track with aluminium; it’s light and it’s strong, exactly what you want in a bike frame. Right? Well yes, but it’s also excavated by means of open-pit mining and takes a phenomenal amount of energy to process it into a usable form.

But aluminium is lighter, you cry, and lighter is better. I don’t like to contradict you, but aluminium isn’t much lighter than good steel. The main difference is that aluminium tubes are thicker than steel tubes — not any great benefit to you, but easier to manipulate for those computer-controlled robots in the mass-production factory we told you about. 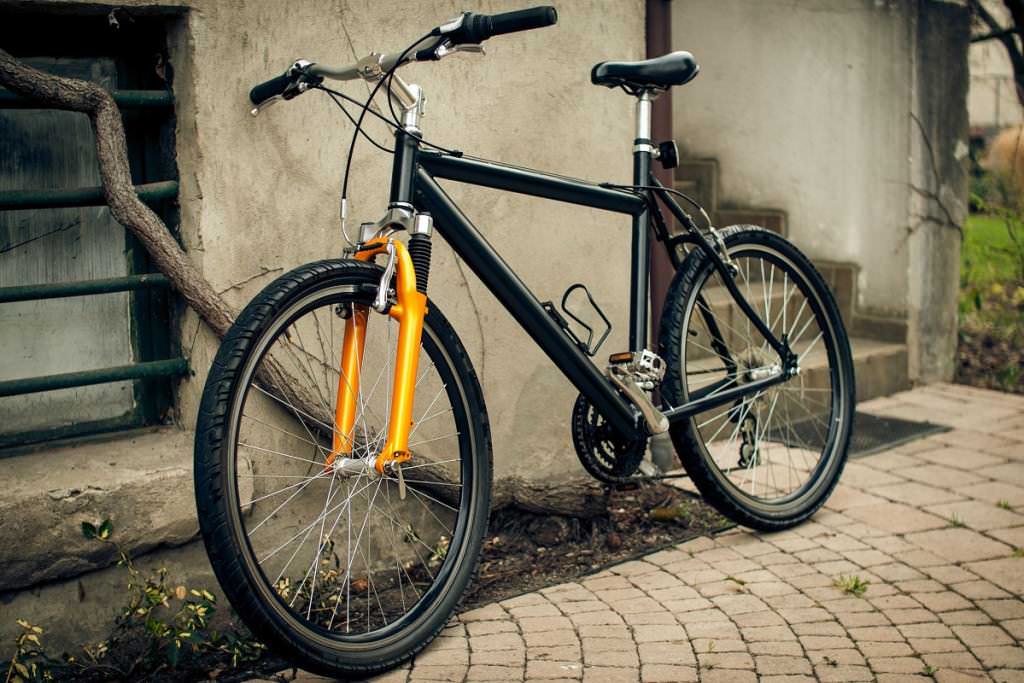 And yes, aluminium can and should be recycled pretty much anywhere. Unfortunately for your eco-dreams, though, for structural reasons the recycled stuff can’t be used for your bike frame. So it’s back to that open pit mining.

The biggest drawback with your aluminium framed bike is fatigue. No, not yours even if it is lighter than the Brawny Beast of your childhood. An aluminium frame is good for 5 or 10 years’ use if you’re lucky. Which wouldn’t be so bad if you had the option to repair, but the aluminium framed bike’s initial low cost is balanced by the fact that it just isn’t cost effective to repair. Which means starting the manufacture cycle all over again. 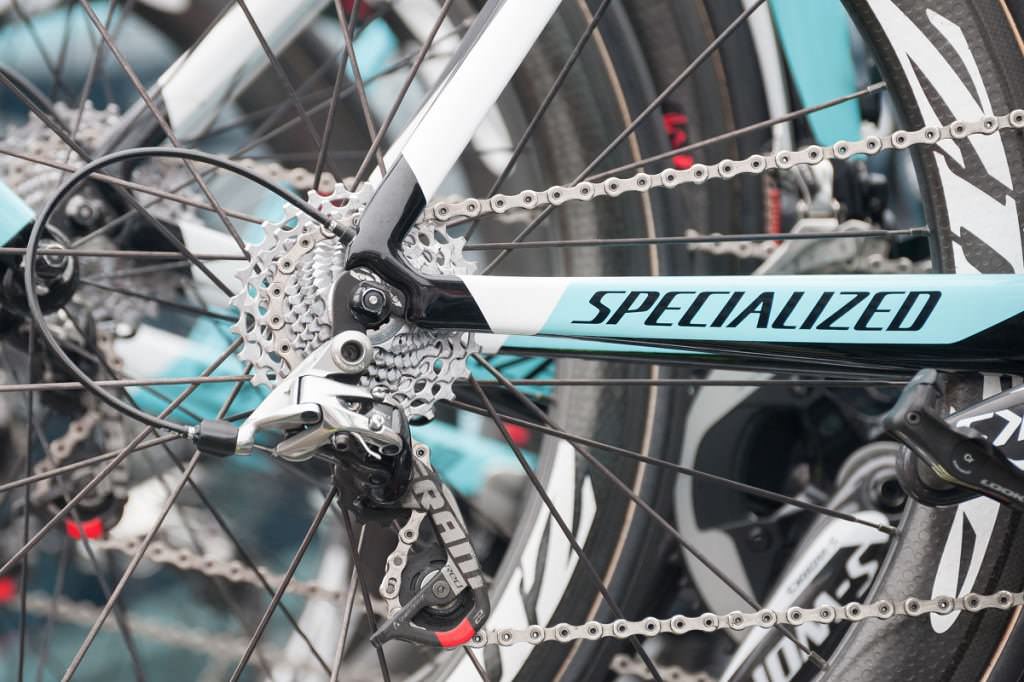 Well how about carbon fibre then? Or titanium?

Okay, if we’re talking cool factor then you’re winning already. Light, reassuringly expensive and ridden by all the top names, you have to be on the right track in the green stakes, correct?

Well, not necessarily. Let’s look at titanium first. We have to agree that your titanium frame won’t rust or corrode and, treated right, will last a lifetime. On the other hand, though, titanium is difficult to extract and notoriously difficult to weld. We’re talking mucho wastage, people.

But then there’s carbon-fibre, the pro’s darling. It’s light, strong, and it’ll make your biking friends drool with envy. But apart from its tendency to fail catastrophically at the worst possible moment, the emissions it releases when it’s being manufactured would make that Lithium-ion battery proud. Add the fact that the totalled frame can’t be recycled once you’ve crashed it and the only green is the envy on your bike-friend’s face. 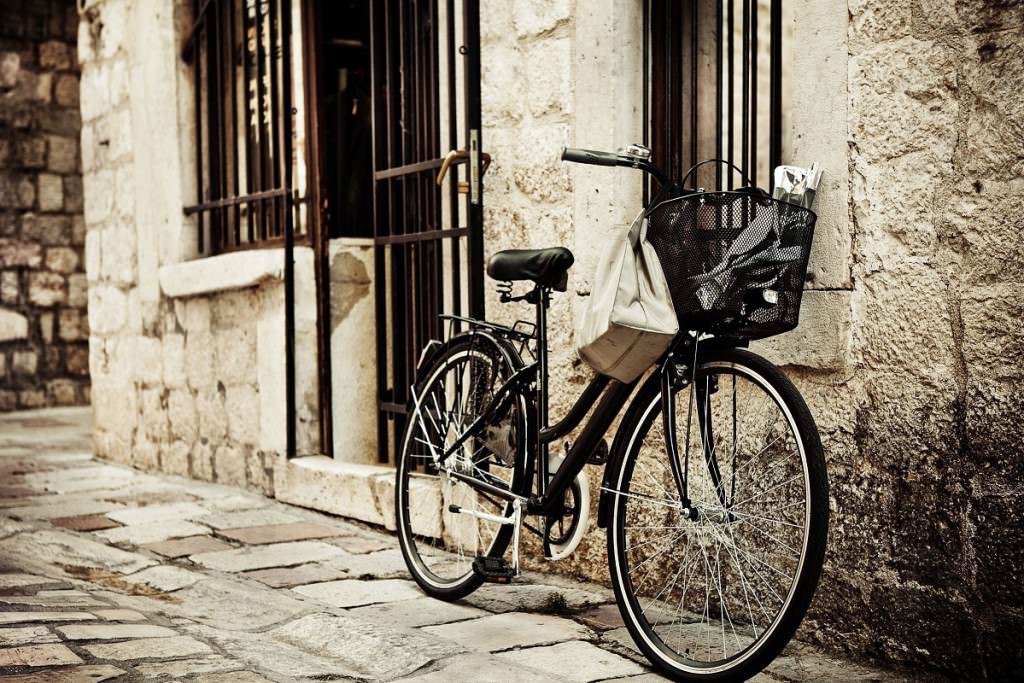 Ah, steel is the way to go then, you cry

And you’d be right, in part at least (but not about Grandma’s old, black monstrosity, okay?). First thing, steel releases only a third of the CO2 emissions of aluminium in the production process and is 100% recyclable. Grandma’s winning already!

Second thing is that it lasts forever. No to be clichéd, but if you take care of your steel frame then she’ll take care of you for pretty much as long as you need her to. When your hipster, carbon-riding neighbour is on his third frame you’ll still be riding high on your old faithful. She might even end up on a peg beside Grandma’s one day. And, even better, when you misjudge a turn and take an inch of skin off your hide you can repair it cheaply and safely to good as new.